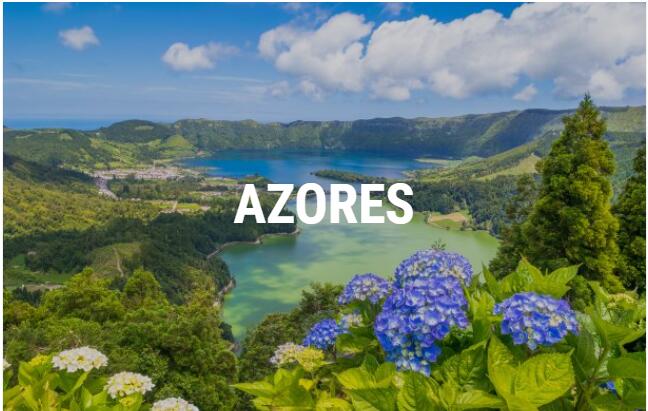 The Portuguese Azores charm with their greenery. The scenic Azores archipelago offers things to do for both hikers and beach holidaymakers.

The Portuguese group of Azores is made up of nine volcanic islands, each with its own characteristics. The strengths of the archipelago in the middle of the Atlantic Ocean are the relatively unspoilt nature, the fresh climate and the stunning scenery.

The largest of the islands is São Miguel, home to more than half of the population of the entire archipelago. From the nature of the green island you can spot idyllic lake landscapes, beautiful sandy beaches as well as high mountains. São Miguel is said to represent the biodiversity of the entire Azores.

In addition to natural sites, São Miguel also has the largest population center in the archipelago, Ponta Delgada. The shopping, good restaurants and impressive sights of the historic city also offer things to do in an urban setting.

Another city destination worth seeing is Angra de Heroísmo on the island of Terceira. In particular, the city’s historic center, a UNESCO World Heritage Site, charms with its beauty.

On Pico Island, you should head to the highest peak of the archipelago at an altitude of more than two kilometers. The island’s picturesque vineyards are also worth a visit. The island is also known among bird watchers.

In Faialista, on the other hand, the tourist will find the interesting Capelinhos Nature Reserve.

A visitor to the Azores should also visit to admire the blooms of the Flores valleys or the Serra Branca, the white mountain of Graciosa. Flores is also known as a diving destination.

The small-bodied Corvo is perhaps the most idyllic of the islands, while São Jorge’s specialties include volcanic rock formations inhabited by pigeons.

Santa Maria is one of the smallest islands in the Azores, where tourists will find the most attractive sandy beaches in the archipelago.

The winding paths of the Azores are a hiker’s dream.

The Azores have a mild maritime climate. The Gulf Stream heats the islands all year round and the temperature does not drop below ten degrees. On the other hand, heat above 30 degrees is also rare. However, the air is humid, which makes the relatively warm weather feel hotter than the Celsius reading.

The Azores archipelago is at its most popular and warmest during the summer months. Likewise, in spring and autumn, the weather is quite favorable, albeit slightly more volatile. A hot day may well be followed by a cloudy and windy tomorrow.

In summer, the Azores are well suited for beach holidays and relaxation. In winter, milder weather, on the other hand, favors hikers who don’t have to sweat in the heat.

There are plenty of activities

In the Azores, everything is surrounded by the Atlantic. The ocean offers an endless range of stimuli and plenty of opportunities for a sea holiday.

The Azores archipelago offers a unique opportunity to observe the daily life of seafood. For example, whales and dolphins can be spotted on excursions organized for tourists. There are also countless different sailings on offer. The lakes on the islands can be taken over by canoe.

According to European standards, the clear waters offer excellent diving opportunities. Surfers get to measure their skills on windier beaches.

In the islands, it is also worthwhile to head from the coast to the hinterland. Even a shorter walk already has plenty to see, but hiking to the highest peak of Pico Island in particular opens up incredible views of the sea and other parts of the archipelago. The spectacular scenery also adds to the golfers, with many well-maintained courses.

The Azores is a safe destination to survive with the usual care. However, the archipelago is located in a seismically active area, so earthquakes are possible.

The tourist is doing well on the island in English. The official language of the Azores is Portuguese, but English is also taught in schools.

The culture of the Azores is Portuguese, but it has its own local specialty, as the Azores are quite separate from the mainland.