Florence is the capital of Tuscany in central Italy and with around 380,000 inhabitants the most populous city in the Italian region. It is located about 230 km northwest of Rome and is surrounded by rolling hills on which wine and fruit thrive. The city was founded as a Roman military colony around the 1st century BC.

In the course of its long history it was a republic and seat of the Duchy of Tuscany and experienced religious and republican revolutions. In the 15th and 16th centuries, Florence was one of the richest cities in Europe, considered the center of trade and finance. During this time it was ruled by the powerful Medici family.

The magnificent city on the Arno owes its fame to numerous well-known personalities such as Leonardo da Vinci, Galileo, Michelangelo, Machiavelli and Dante, who have shaped it with unique works of art and architectural marvels. Florence is home to the world’s largest collection of universally known works of art. The historic old town has been a UNESCO World Heritage Site since 1982 and is visited by millions of tourists every year.

In the following we present you the most exciting tours, the most beautiful attractions and the best sights in Florence. 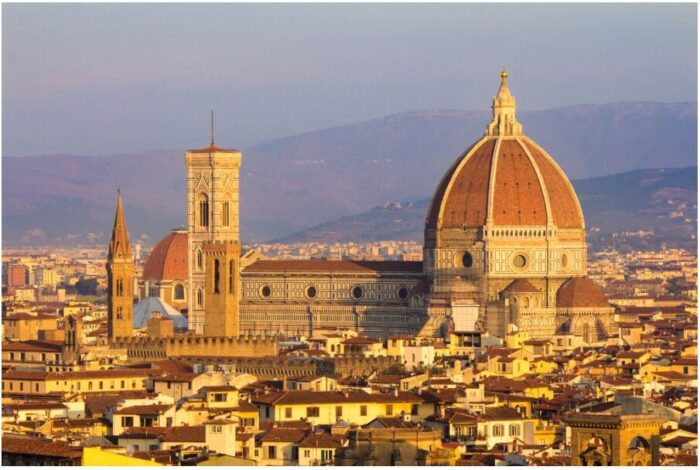 The gothic cathedral of Florence, the Basilica di Santa Maria del Fiore (also known as “il Duomo”), is the symbol of the city. It was named after the symbol of the city, the lily (Fiore) and, together with the bell tower (campanile), dominates the cityscape. The cathedral was built on the site of the former Santa Reparata church, the remains of which can be seen in the crypt. Its construction began in 1296 and was completed in 1436 with the huge red-roofed dome.

The original facade was destroyed in 1587 and only replaced by a Gothic facade in 1864 by Emilio de Fabis. The walls are covered with white, green and pink marble slabs of various shapes. The dome has an octagonal design without a load-bearing wooden frame, which was unknown at the time. It was given horizontal iron chains for reinforcement and is the largest brick dome in the world. To commemorate the great work of Filippo Brunelleschi, there is a statue in the adjacent square that looks at his creation.

The Campanile di Giotto was built on the Piazza del Duomo as a bell tower for the adjoining Florence Cathedral and is part of the building complex. The Gothic tower was built from 1334 by Giotto, who died in 1337. After his death, Andrea Pisano and Francesco Talenti took over the building of the tower until it was completed in 1359. The facade consists of hexagonal marble slabs in geometric patterns.

The green, white and red marble comes from Carrara and Siena. The bell tower is divided into different levels and one of the seven bells of the campanile is housed on each level. It is 84.7 meters high and can be climbed via 414 steps to get a breathtaking view of the historic old town.

The Uffizi Gallery houses the world-famous Florence Art Gallery, which contains the largest collection from ancient Greek sculpture to 18th century Venetian paintings. It is located in the U-shaped Palazzo degli Uffizi, which was built between 1560 and 1580 as the seat of government of the then Duchy of Tuscany.

It was built by the Medici family, who bequeathed the palace and its art collection to the city in 1743. Most of the collection dates from between the 12th and 17th centuries. The museum owns over 3,100 works of art, of which around 1,700 objects are regularly exhibited.

The gallery in Piazza San Marco was founded in 1563 by Cosimo de Medici and the three artists as the first European academy for painting. Works by Michelangelo, Botticelli, Lippi, Gaddi and Orcagna are exhibited in the premises. The heart of the exhibitions is Michelangelo’s David statue, the original of which is enthroned on a grandstand. Next to it are the four unfinished statues of his Prigioni (prisoners), which were intended for the grave of Pope Julius II.

The statue of San Matteo (Matthew) and Giambologna’s sculptures from the robbery of the Sabine women are also located here. In the adjoining rooms there are further exhibits with top-class paintings from the time of the Florentine Renaissance and a collection of musical instruments from the Medici and Lorraine families. It is one of the most visited attractions in Florence.

The jewel of the art collection and the most famous sculpture in art history is Michelangelo’s depiction of the young warrior David. For the first time, he was portrayed not as a young boy, but as a man in his prime. In 1504 the ceremonial unveiling took place on the Piazza della Signora in front of the Palazzo Vecchio, which astonished its viewers.

Michelangelo was barely more than 20 years old when he began sculpting the 5.17 m high statue in 1501. He made it from a single block of white Carrara marble and spent four years working on the work of art, which shows the smallest details such as the veins of his sinewy arms and the muscles of his legs. 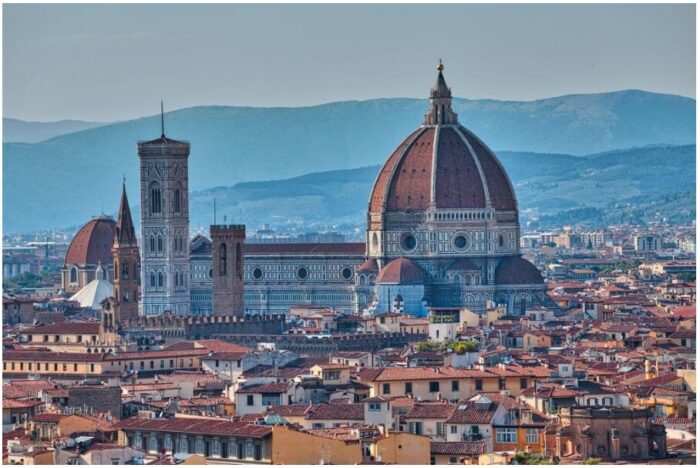 Palazzo Vecchio is a massive fortress palace, which is surrounded by countless battlements and has a 94 m high tower. It was designed by Arnolfo di Cambio between 1298 and 1314 for the Signoria (city government). Today it houses the mayor’s office and the municipal council.

An unforgettable panoramic view is offered from the top of the Torre d’Arnolfo (tower). Inside, Michelangelo’s sculpture Genio della Vittoria (Genius of Victory) adorns the Salone dei Cinquecento, a magnificent hall with outstanding murals. It was built in the 15th century for the ruling Consiglio dei Cinquecento (Council of 500).

The most important historical buildings of the old town are located around the Piazza della Signora. Next to the Palazzo della Signora there is the Uffizi Gallery, which now houses a prestigious museum, the Palace of the Tribunale della Mercanzia from 1359, which once served as the scene of traders’ trials and is now home to the Bureau of Agriculture, and the Palace of the Assicurazioni Generali, built in 1871 was created for commercial purposes.

Other historical structures include the Loggia della Signoria, a corner building with high open arches that was used for public gatherings and is now used as an open-air gallery, the Palazzo Uguccioni, Palazzo dei Mercatanti and the Palazzo dei Buonaguisi.

The Baptistery of San Giovanni is one of the oldest and most important religious buildings in Florence. It is dedicated to the city’s patron saint, John the Baptist. The current building was erected on the site of a former Roman structure from the 1st century. None of the original Roman buildings remain, but the current baptistery dates from the 11th and 14th centuries.

The building was consecrated in 1059 and at the time had to be large enough to accommodate the crowd attending the biannual christening ceremony. The octagonal building is built in the Tuscan Romanesque style and clad in white and green marble and features elegant arcades between polygonal columns.

The outstanding Ponte Vecchio is the oldest bridge in the city, which crosses the Arno with three arches. Pastel-colored houses are enthroned on the bridge with small shops selling handicrafts and regional products. Ponte Vecchio is the most picturesque built arch bridge, which is one of the six impressive bridges in Florence.

It was probably built on a place where the Roman Via Cassia crossed the river with stone pillars and wooden boards. Until 1218 it was the only bridge that crossed the Arno. The Roman building collapsed in 1117 and 1333 due to flood damage, so that reconstruction began twelve years later.

Palazzo Pitti is a Renaissance palace built on behalf of the banker Luca Pitta in 1458 and later bought by the Medici family. Over the centuries it served as a residence for various rulers of the city until the Savoy family ceded it to the state in 1919. The palace is one of the most important sights in Florence.

Today it houses five museums with impressive collections of silver and jewelry, several art exhibitions and a number of rooms that bring the history of the city back to life. A highlight of the palace architecture is the artichoke fountain by Giovanni Francesco. The palace looks most enchanting when it shines in strong pink tones at sunset. 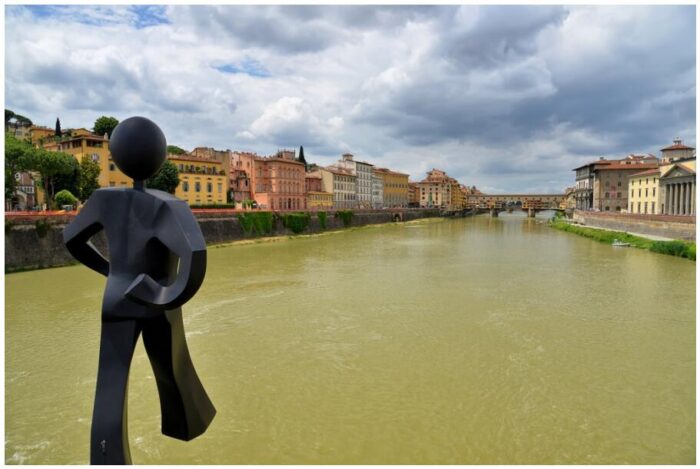